The recall of workers on layoff due a strike in the automotive sector contributed to a reduction in the number of unemployed in Michigan in November 2019.

The impact was particularly strong locally where Genesee County’s unemployment rate declined by a full percentage point to 3.8 percent from October to November, according to Michigan’s Bureau of Labor Market Information and Strategic Initiatives. The city of Flint’s unemployment rate also decreased from 8.7 percent to 6.9 percent over the same period, the most recent data available.

Total nonfarm jobs in the county rebounded by 7,200 between October and November. The increase was driven in large part by the region’s manufacturing sector, where payroll employment rose by 5,200. The November jump in manufacturing employment reflected the end of the UAW strike against General Motors and the recall of workers to jobs.

In fact, Genesee County, also identified the Flint metropolitan statistical area, led the state with the largest gain in nonfarm jobs with 5.2 percent for the month, followed by Saginaw (2.4 percent) and Lansing (1.9 percent) – all metro areas in Michigan were negatively impacted by the October labor dispute in the automotive industry. 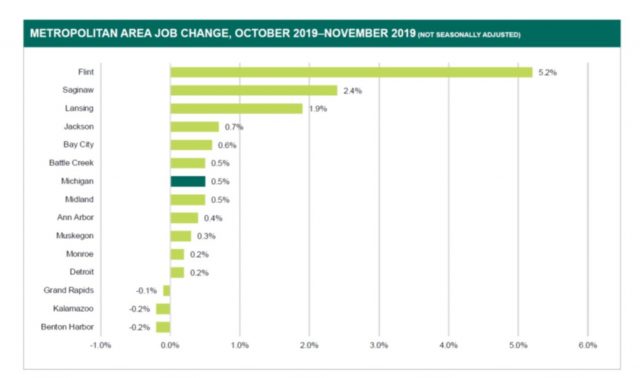