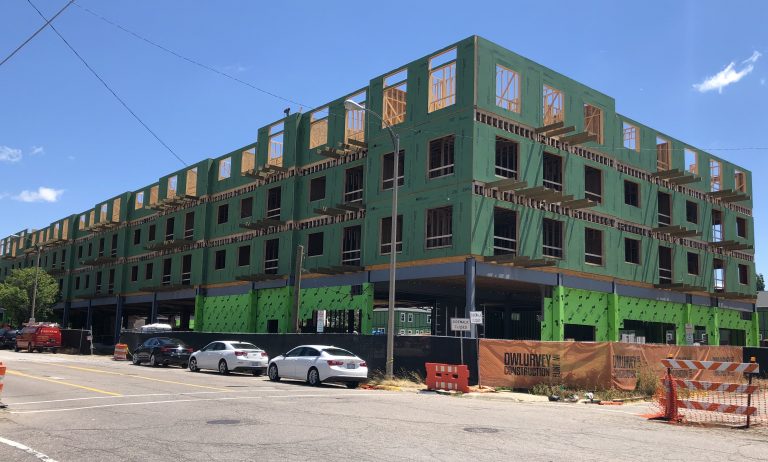 Today, PK Companies and Uptown Reinvestment Corp. (URC) hosted a Hard Hat Tour for local dignitaries and media to provide a first-hand look at the redevelopment project underway on the site of the former YWCA building.

The Marketplace Apartment complex – bounded by east 3rd, Wallenberg, Stevens and east 4th streets – will be a four-story mixed-use apartment building on the north end of the block, townhomes on the southern end, and parking in the middle of the block. The apartment building will also feature three retail spaces (a total of 4,600 square feet) on the corner of Wallenberg and 3rd. The $19.5-million project is slated for completion by January 2020.

Participants toured portions of the first- and second-floors of the north building as well as one of the townhouses.

“There has been a great deal of interest in this project and, now that it has really begun to take shape, we’re excited to provide an up-close look at our progress to-date,” said Chris Potterpin, vice president of PK Companies, a family-owned real estate firm based in Okemos. “This was also an opportunity to publicly thank our project investors and partners for their engagement and support in transforming this site.”

The apartment building will include a mix of one- and two-bedroom units with modern amenities and fixtures, including central heat and air conditioning and in-unit laundry. The townhomes will have individual entrances and be a mix of two and three-bedrooms. The development will include a fitness room, community lounge, playground and a plaza in the center of the development with a pavilion and barbecue area.

The project will feature a total of 92 units, with half of the residences provided as an affordable living option to the community.

“Marketplace Apartments is part of a continual effort by Uptown Reinvestment to move economic development forward in downtown Flint,” said CFO Stephanie Fenton. “One of our goals is to increase the resident population by satisfying the growing demand for downtown living in Flint.”

The site is situated two blocks south of the Flint Farmers’ Market and catty-corner from the MTA transit center. It is also within a few blocks of the Capitol Theatre, the retail corridor on Saginaw Street and the University of Michigan-Flint campus.

The project is being financed with tax credits allocated by the Michigan State Housing Development Authority (MSHDA), a Community Revitalization Program grant from the Michigan Economic Development Corp., foundation grants, a conventional mortgage and developer equity.

“This project is helping to revitalize downtown Flint, providing much-needed affordable living options while building a community,” said Mark McDaniel, Cinnaire president & CEO. “Marketplace Apartments is a model for community development, meeting a critical need to provide affordable housing with proximity to public transportation, healthy food options, green space and cultural opportunities. Cinnaire is grateful for the opportunity to have partnered with these mission-driven partners as an example of public-private partnerships helping make a positive impact in our communities.”

PK Companies creates and manages multifamily housing and commercial properties through community partnerships that enrich the lives of residents and neighborhoods. PK has been delivering high-quality developments for over 25 years and specializes in affordable housing using various government financing programs. PK has received six housing tax credit awards in Michigan over the last four application rounds.

If you are interested in becoming a resident of the Marketplace, please contact PK Housing and Management at 810-701-9864 or visit www.flintmarketplace.com.