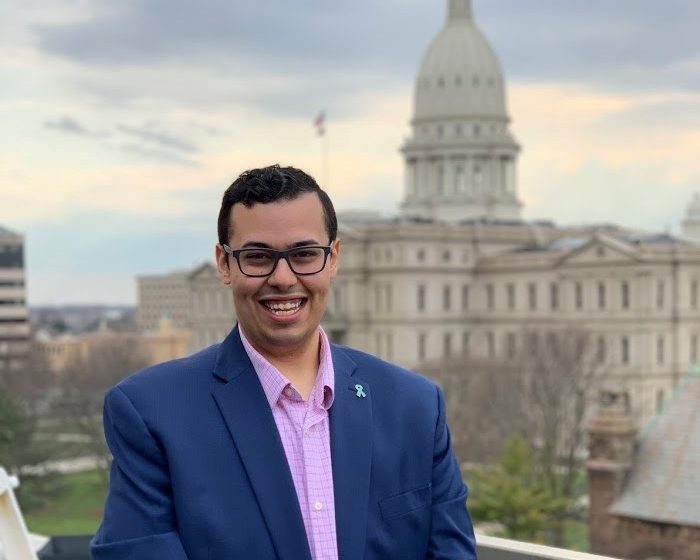 Domonique Clemons knows the importance of a good handshake—a skill he was first introduced to in TeenQuest.

“We learned how to have a firm handshake and to make direct eye contact,” says Clemons, who graduated from Southwestern Classical Academy in 2011. “On the surface, it seems like such a small thing. But it’s something I utilize every day.”

According to Clemons, the program also taught him about leadership and standing up for your values.

Today, Clemons uses those skills in his role as legislative director for State Representative Alex Garza in the Michigan House of Representatives.

What steps did you take to get to your current position?

While at Michigan State University, I got involved with the student government and was elected student body president. That was one of my first experiences in the political process. After graduating, I worked full time as a speechwriter and communications assistant for the Michigan Senate Democratic Caucus and a regional director for the Hillary Clinton Campaign. For two years, I worked in non-profit advocacy with the Michigan College Access Network, which led me to my current position in the state legislature.

What is your favorite part about your job?

Meeting with stakeholders and constituents. They give us information about what’s happening in the community and we find legislative solutions to those problems. We help pass bills into laws that make people’s lives better. It’s really moving when we can see the direct impact we’re having on our constituents.

What are your plans for the future?

I plan to stay with Representative Garza until the end of his term. I also want to continue to use what I have learned to give back to our community. Seeing so many folks leave our community to get a degree and then take their education and skills out of state, it was important for me to move back to Flint after graduation and be a part of helping rebuild Flint and Genesee County.

What advice would you offer to current TeenQuest students?

Don’t listen to any of the hype that you must wait until a certain age or that you’re too young to make a difference. Have faith in yourself and your abilities. Have the confidence to rock an interview and get the job you want, regardless of your age.

What has been your proudest moment?

Being elected as student body president at Michigan State University. Specifically, being elected as one of the first minority leaders in our student government, and one of very few from Flint to hold that position. Most importantly, I was able to serve in that role during the Flint Water Crisis. I worked with our student government and the university administration to hold drives for bottled water and raised over $30,000 for the Community Foundation of Greater Flint to help with the efforts.

TeenQuest and Summer Youth Initiative are made possible through the generous support of the Charles Stewart Mott Foundation.