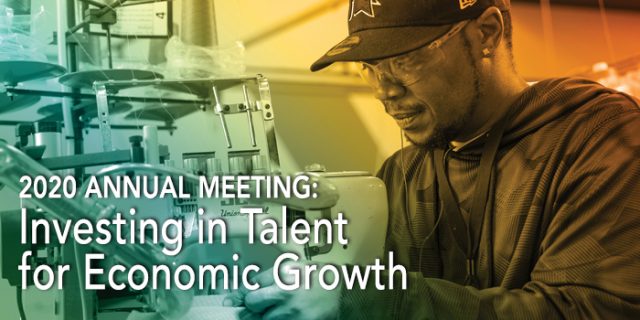 The Flint & Genesee Chamber of Commerce today reported on a range of private and community investments in 2019 to help create a brighter future for Flint and Genesee County. The Chamber’s annual meeting, held before a packed ballroom at the Holiday Inn Flint-Grand Blanc Area, also included an update on the progress achieved in year two of the organization’s three-year strategic plan.

This year’s gathering – themed ‘Investing in Talent for Economic Growth’  – focused on the importance of attracting top talent and developing a skilled workforce to achieve economic success.

Domino’s Pizza Chairman David A. Brandon, the keynote speaker, further elaborated on the critical link between talent and business success from his perspective as a chairman and former chief executive officer for some of the country’s largest corporations, including Valassis, Inc., an international marketing services and sales promotion company; Toys ‘R’ Us  and Domino’s Pizza.

The 2019 Annual Report details how the Chamber collaborated with members, partners and investors to strengthen and broaden the region’s talent pipeline.

“Based on discussions with local employers and others across the state, there are two primary contributors to the talent problem,” said Herman, to an audience of more than 400. “One stems from the skills gap, where many people lack the skills they need to compete for jobs of today and beyond. The second one is the people gap, where many businesses can’t find workers they need, when and where they need them.

“Addressing both of these gaps is vital to our region’s competitiveness.”

In addition to talent initiatives, the Chamber worked with investors and partners to build a strong business climate to help members prosper individually and collectively. Among those efforts are:

Following are 2019 accomplishments directly related to the Chamber’s business advocacy, economic development, tourism and education efforts, and other programs and services:

“In year two of our strategic plan, we had some wins, but we are not resting on our successes,” Herman said. “We have a lot of work to do and we’re up for the challenge!”

Click here for a full copy of the Chamber’s Annual Report.