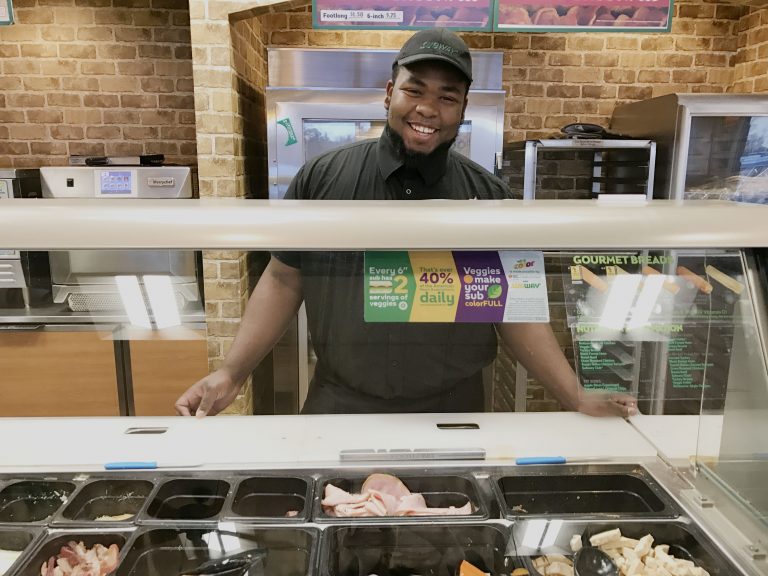 By the time TeenQuest graduate Devontia Whigham applied to work at Subway at age 18, he was more than ready for the job. After all, Whigham had gone through 40 hours of pre-employment training and had previously worked at Kearsley Park through Summer Youth Initiative.

“I don’t think I realized how much I was learning from TeenQuest at the time,” says Whigham, who graduated from Mt. Morris High School in 2012. “Looking back, I can see how much it helped.”

According to Whigham, the afterschool program taught him how to set goals and better communicate with others. Job interviews used to send him into a fluster. But after learning how to prepare and practice for job interviews, his confidence grew.

That Subway interview? “I nailed it,” he says with a smile.

Initially, Whigham started as a sandwich artist in Flint, but supervisors soon took note of his work ethic. Within a year, he was promoted to manager and began taking assignments at a number of different locations.

Here, he talks about his experience with TeenQuest, his current job and more.

What stands out to you as TeenQuest’s most memorable lesson?

One day, Mr. Clark (our facilitator) held up $20 and asked who wanted it. Everyone raised their hands. But I got up, walked over to him and said, “I’ll take it.” And he handed it to me. It showed me the importance of taking initiative. Sometimes, you have to get up and do something without having anyone telling you to do it. I took that with me to my job at Kearsley Park, and I took it with me to Subway.

How have you applied that lesson at Subway?

When I first started, I noticed that my managers did certain things, like keeping the store clean and cutting off box tops. I started doing that, too, without being asked. I was offered my current position because of that initiative.

What is your proudest work-related moment?

I love working with people, and I like to put a smile on their faces. That’s something that I take very seriously, so I was proud to win a customer service award from (Subway franchise operator) Dortch Enterprises in 2015 and 2016.

What advice can you offer to current and future TeenQuest students?

Stay focused, stay dedicated, and good things will happen. Don’t be afraid to take chances. If you want something, go for it. You never realize how much the little things happening in your life right now will make a difference in the future.

I’m going back to school to finish up my last year at Mott Community College. I’m studying criminal justice and want to be a police officer one day.

ALSO IN THIS ISSUE