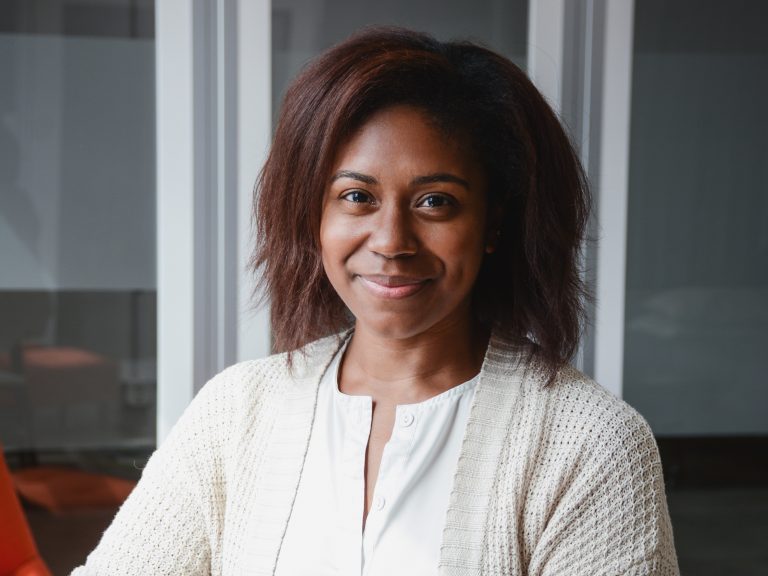 Brandee Cooke-Brown started working at 100K Ideas the year it launched. She found the opportunity after attending a networking event at the Ferris Wheel – the building which houses the nonprofit organization – where she met 100K Ideas’ co-founder David Ollila.

“We got to talking and I shared my background, and we kind of just clicked,” says Cooke-Brown. “A week later I had an interview, and I came on board a few days later.”

She started at 100K as a project manager overseeing the student staff that worked there and the projects that were coming in. As the organization started to grow, Cooke-Brown moved up the ladder to director of Community Engagement where she launched initiatives that got 100K ideas into Flint’s neighborhoods. And when it came time for changes in leadership, Cooke-Brown was approached by Ollila and asked to take charge as executive director.

“Coming into leadership was a bit of a learning curve,” says Cooke-Brown. “I knew students had a good grasp and I let them take the lead. Looking back, we went through some growing pains we didn’t need to. But lessons were learned and overall, it worked out.”

Growing into a leadership role may have taken some getting used to, but Cooke-Brown has found her footing and is now helping move 100K Ideas forward with help from her staff.

Tell me about the beginning of 100K Ideas

The idea came from two individuals, David Ollila and Phil Hagerman. David had created something similar at Northern Michigan University and met Phil before the Ferris Wheel was even being developed. They decided to create 100K Ideas as an organization to help people in the idea stage of a business.

What are some successful businesses you’ve seen come through 100K Ideas?

The two we typically share are Kuhmute and the John L Group. Kuhmute is a tech company, founded by Peter Deppe. Peter is a Kettering University graduate and a former 100K Ideas student engineer on our team. He created a charging infrastructure for electric modes of transportation, such as e-bikes and e-scooters. John L Group is a company that handles logistics, finance and construction. They helped us by piloting a program we were looking to launch and from there we helped as they were building their brand.

Why was it important to open this in Flint?

There are many organizations in the area that can help people who have an idea and know where they are going, but we are kind of the top of the funnel for starting a business. We are a place where people can come in with an idea or something they’re inspired by, and we help them judgment-free and at no risk. 100K is a safe space to help ideas become reality.

It’s not what you expect. It’s a robust city and county with so much going on and many people with small businesses doing amazing things.

How did you end up in Flint?

I came here for 100K Ideas. My husband is from Flint, but before I started, we were working in Lansing. When the opportunity came, we moved here. It took some time to get adjusted but now I am excited to call it home.

Where do you like to shop, eat and spend time in Flint & Genesee?

I love downtown Flint! When we first moved here, we stayed on Saginaw Street. We loved supporting downtown businesses when we would eat or shop because everything is locally owned here. The Flint Farmers’ Market is also one of my favorites, you can go there with no plan and have a great time, and you’ll run into everybody which is also fantastic.

What advice would you offer others who would want to pursue a leadership position?

Prepare for the position you want and make your desires known. My supervisor was very open to what I wanted to pursue but without that open communication, you can get lost in the shuffle. It’s important to let your supervisor know because maybe you’re not ready for it and can take some professional development or training. I participated in the Lead Now training program which made me more comfortable with my leadership style and I was able to find my balance as a leader.