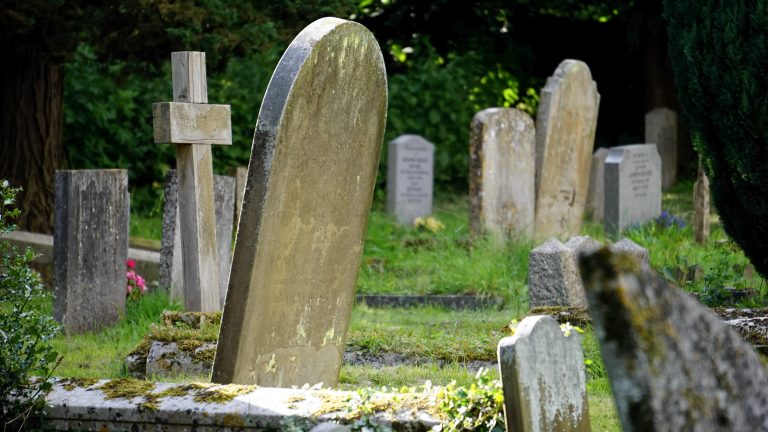 Avondale Cemetery is one of Flint’s oldest remaining burial grounds. Not as well kept as Glenwood but still a favorite destination for local taphophiles. Full of crumbling tombstones and ancient mausoleums the cemetery is filled with history…and spirits.

Disturbed spirits are a popular trope for horror movies and ghost stories. Often combined with a tale of the house or building being built on top of an old cemetery, where bodies were left behind.

In Flint, this frightening tale is more than just a spooky story.

The Flint City Cemetery was established in 1842 when Flint was still just a village. By the 1950s trash and overgrown weeds had taken over.

The city decided to redevelop the land.

The property was sold to Albert J Koerts in 1958, who owned Koerts Glass and Paint.

The remaining residents of the old City Cemetery were reburied in Avondale along with 122 grave markers.

The section where the gravestones were moved to inside Avondale is called Pioneer’s Row. The stones are arranged in two rows, very close together, in a way that suggests stones and bones are probably not buried together.

In 1985 the remains of more than 24 bodies were found during construction in the basement of the Holiday Inn Express at 1150 Longway Boulevard and I-475. They were eventually reburied at the Flint City Cemetery.

Rumors swirl that Albert J Koerts, who purchased the old cemetery property, just moved the grave markers to Avondale which means the remains of some of Flint’s earliest residents may still be lost under Flint buildings and parking lots. Unfortunately, Koerts is long dead and took that secret to his grave.

Those remains found under the hotel? Do they belong to grave markers in Avondale or do they belong in the Flint City Cemetery?

Are the spirits upset that their final resting place was disturbed? Do they care if their burial grounds are not properly labeled?

Several psychic mediums say that Avondale is filled with spirits, they see them clearly…everywhere. The cemetery is a popular destination for ghost hunters in Flint. Orbs and strange noises have been reported along with numerous sightings.

What will you find at Avondale during the Explore Ghosts in Flint & Genesee tour?

Roxanne Rhoads is an author, book publicist, mixed media crafter, and lover of all things spooky. Read more about Flint’s most haunted places in her latest book, Haunted Flint.