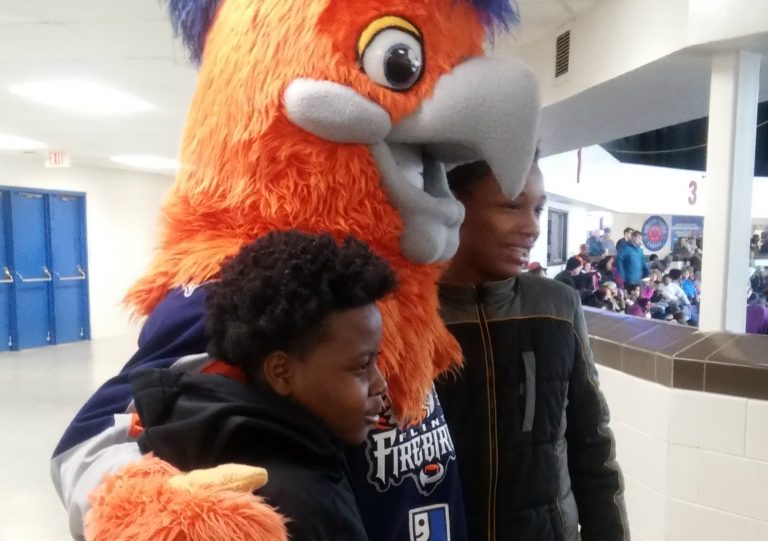 FANS OF THE FIREBIRDS

After attending their regular YouthQuest programming on Feb. 8, about 450 students hopped on the bus for an evening field trip at Dort Federal Credit Union Event Center. There, they watched the Flint Firebirds take on the London Knights – also a junior hockey team playing in the Ontario Hockey League. Not only did the event get students excited about hockey, it provided them with the opportunity to celebrate and cheer on one of the city’s favorite sports teams.

HISTORY IN THE MAKING

During January and February, students in the Sloan Science Club at Randels Elementary participated in a number of hands-on, out-of-the-box science projects on a weekly basis. Last month, those students were invited to visit the museum, where they met with the architects working on the facility’s multi-million-dollar renovation. While there, the YouthQuest students were asked for their input on what the renovated museum and new design should offer. They were excited to share their thoughts about the Buick Gallery space and increased public amenities, which will include a dining area and additional classroom space for student groups.

TEAMING UP WITH DAY SCHOOL

When Durant-Tuuri-Mott Elementary’s day school staff hosted a science-themed family night, YouthQuest students were invited to participate in the festivities. As part of the event, afterschool students and families learned about electrical circuits, engineering with Legos, the science behind the construction of race tracks and more. The evening was particularly exciting for YouthQuest as it displayed the strength in the relationship between the day school and afterschool program. We look forward to continuing and building on that partnership.

BANKING ON OUR FUTURE

Operation HOPE, Huntington Bank and YouthQuest launched the pilot of the Banking On Our Future (BOOF) program in February. The program aims to empower youth and teens to take control of their financial futures by teaching them about basic financial concepts. At the elementary level, for instance, students participated in a blind-tasting of grape soda – one generic and one name-brand. The lesson: If you can’t taste the difference between the two, why buy the more expensive version?