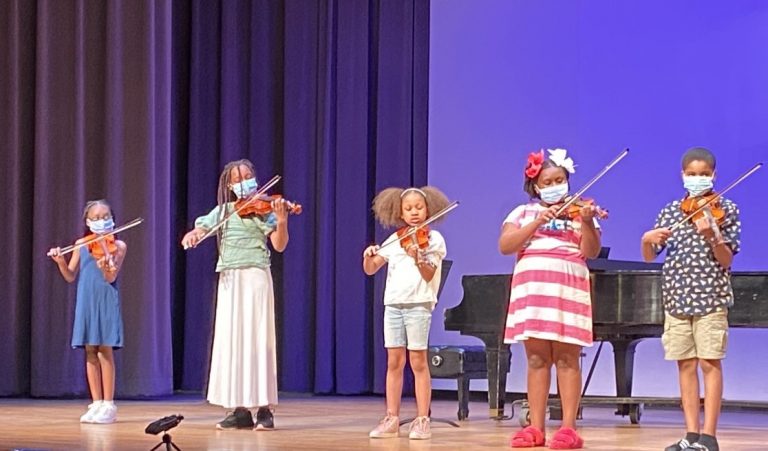 Play me a song

Students at multiple YouthQuest sites have had the opportunity to learn how to play the violin thanks to a partnership with Sphinx Overture. At Eisenhower Elementary, for example, a music teacher from Sphinx has provided violin lessons twice a week over the course of the school year. As a reward for sticking with their training, several students were able to keep their instruments to encourage practicing outside of and beyond the afterschool program. At the end of May, those students joined with students from all of Sphinx’s Flint programs for a recital at Flint Institute of Music. The event included performances from Sphinx alumni, including a student who has since graduated from high school. “It was inspiring for our kids to see that,” says Donna Tanner, site teamer leader at Eisenhower.

At Accelerated Learning Academy, YouthQuest is partnering with Flint Community Schools and Flint Community Education Initiative to start an esports club. Currently, students are competing against each other during the afterschool program, where they play games including Minecraft, Fortnite and Mario Kart. The plan is to start competing against other schools in and beyond the Flint school district next year. According to YouthQuest Site Team Leader Korie Harden, the club teaches students about teamwork and opens their eyes up to nontraditional career paths.

This spring, YouthQuest piloted a new mathematics program at three of its sites. Called Number DNA, the online program allows students to practice and strengthen their pre-algebra skills in addition, subtraction, multiplication and division. All students start with the same workout, or group of equations, and how they perform determines what their next workout will be. As they advance levels, the equations become increasingly more difficult. As part of the pilot at Brownell STEM Academy, Durant-Tuuri-Mott Elementary and Neithercut Elementary, YouthQuest students took part in a friendly competition in which the site with the highest number of solved equations per student over a two-week period would win a pizza party. Ultimately, that honor went to Neithercut Elementary, which averaged 303 solved equations per student.

Students at South Bendle Elementary had the opportunity to dive deep into reptiles, nature and habitats. Representatives from For-Mar Nature Preserve & Arboretum brought live reptiles to the site, teaching students about turtles, salamanders and geckos. After learning about the traits of different reptiles, students took a field trip to For-Mar in May. There, they walked the trails, learned about the multiple habitats located in the woods and saw additional reptiles at the For-Mar tree house. It was the perfect activity that allowed them to see for themselves some of what they had been learning about.