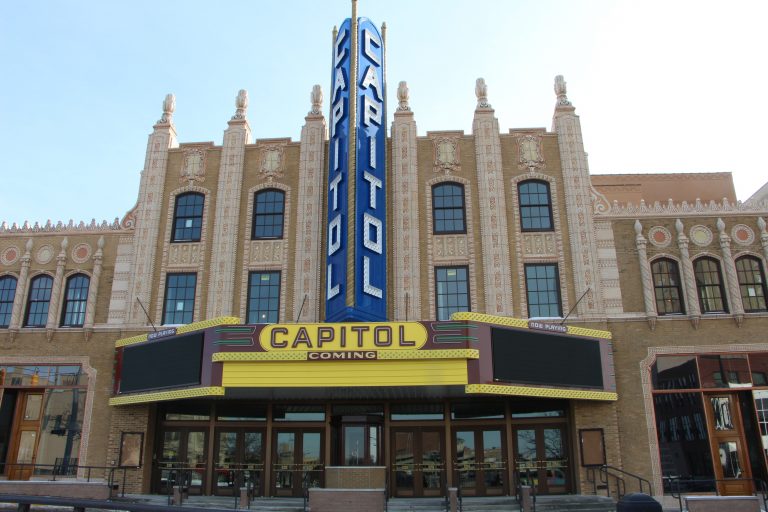 Flint & Genesee’s rich history – preserved in historical estates and iconic civil and commercial buildings – has become one of the region’s most valuable assets. Landmark sites throughout the county draw thousands of hometown and out-of-town visitors each year and have become a part of a new story in Flint – economic opportunity through regional tourism.

Downtown Flint’s Capitol Theatre launched a soft opening late in 2017 after an extensive restoration. Originally designed by John Iberson for the Butterfield Theater Chain, it is a rare example of the “atmospheric” theater, popular in the 1920s. The interior, inspired by a Roman garden, features an eclectic assortment of building facades and architectural elements – from Romanesque to Italian Renaissance to Baroque. A Domed sky-blue ceiling with twinkling stars and wispy clouds produced by a fog machine completed the outdoor illusion. When it opened, the Capitol was Flint’s largest and among Butterfield’s most lavish.

Opened in 1928, the Capitol was a downtown cultural fixture for decades, but was shuttered since 1996. Now, with approximately 100 events of varying sizes per year, the revitalized Capitol Theatre may soon attract more than 60,000 visitors annually.

“The Capitol’s re-opening deepens the impact of our vibrant arts community and becomes a resource to foster creativity right here in Flint,” says Jarrett Haynes, Executive Director of The Whiting, one of the lead partners spearheading the Capitol Theatre project, along with not-for-profit Uptown Reinvestment Corporation. “We are so proud to bring this treasure back to the city and look forward to welcoming visitors from the city and region for generations to come.”

Applewood Estate is another of Flint’s treasures. The family home of Charles Stewart Mott, one of the founding partners of General Motors, celebrated its 100th anniversary in 2016. The centennial season introduced the estate’s historic market, new interactive exhibits – including portraits that “come to life”- and free tours inside the historic residence, never before open to the general public.

Listen on the National Register of Historic Places in 1979, the estate includes extensive gardens, a barn and a chicken coop. The historic garage, once home to Mott’s beloved cars, is now lined with hands-on exhibits. The residence and 34 remaining acres, including an orchard with 29 varieties or heritage apples, are owned and maintained by the Ruth Mott Foundation.

Flint is filled with the antiques of its founding. Neighborhoods include gens like Woodcroft Estates, home to the city’s wealthiest families in the 1920s. The 300-acre plot was developed for early auto industry executives and features many ornate period homes, which make the neighborhood a popular self-guided driving tour attraction. Check out the homes of auto pioneers like F.A. Bower, Charles Chayne, Harlow Curtice, Enos DeWaters and E.T. Strong.

See more historic homes on a walk through Carriage Town Historic District, including the houses of Fred A. Aldrich, Jackson Hardy, Albert Kratz, James Whiting and Charles W. Nash. The district is also home to several early factories, including the Durant-Dort Carriage Factory, as well as factory employee housing.

The homes have become part of Flint & Genesee collection of locations bringing people to town – or out and about to see the beauty found right here at home.

From lumber town to Underground Railroad station, carriage parker to automaking giant, the story of Flint is a fascinating one, preserved in many of the city’s homes, neighborhoods and museums. As residents rediscover all that Flint & Genesee has to offer, they become valuable community ambassadors, naturally sharing their experiences with others.

The power of those experiences has led to a local certification program – the Flint & Genesee Certified Tourism Ambassador (CTA) program, offered through the CVB, a training program which helps more than 8,000 daily visitors maximize their stay.

Want to see more, do more and experience more in Flint & Genesee? TO learn more about becoming a hometown tourist or other opportunities to go www.flintandgenesee.org/events.