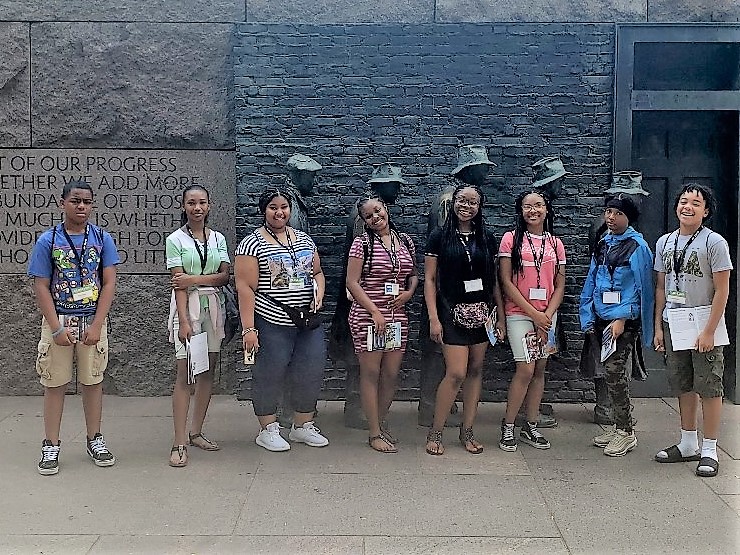 How do you engage someone in productive civic discourse? As eight YouthQuest students recently learned during a trip to the nation’s capital, it helps to ask open-ended questions and practice active listening.

That’s just one of many take-aways students gleaned from the four-day tour, which was offered through a partnership between YouthQuest and the Close Up Foundation in Washington, D.C. In fact, the students participated in a variety of workshops focused on civic engagement and empowering youth to find their voices on the issues that matter most to them.

“This field trip was really about giving the students the tools they need to make an impact in their community,” said Nefetari Jones, YouthQuest Site Manager. “They might not be of voting age just yet, but they can still make a difference.”

During the immersive tour, students weren’t just exposed to new ideas. They also met new people and learned about new perspectives. For Mekayla Moore, one of the highlights was getting to know students from outside of Michigan.

“I got a chance to meet students from Guam,” says Moore, who will be entering 7th grade this fall. “I liked learning about them and where they were from. I had never heard of Guam until I went to Washington, D.C.”

According to Moore, she also appreciated the field trips to historical sites including the White House and the Smithsonian National Air and Space Museum, home to the world’s largest and most significant collection of aviation and space artifacts.

“One thing I learned about was an African-American woman named Bessie Colman,” says Moore. “She went to a school in France and learned to speak French so she could get her pilot license. The reason she did that was because African Americans were not allowed to become pilots.”

Experiences like this are key to the Close Up mission, which aims to inform, inspire, and empower young people to exercise the rights and accept the responsibilities of citizens in a democracy. By bringing history to life, the program helps students better grasp the significance of the people and events that have shaped the United States.

“It’s one thing to go sight-seeing,” Jones says. “It’s another thing to be fully immersed in the history of the places you’re visiting. This trip gave our students a greater appreciation of these historical landmarks and a richer knowledge of why we were visiting them in the first place.”

To learn more about the Close Up Foundation, visit www.closeup.org.