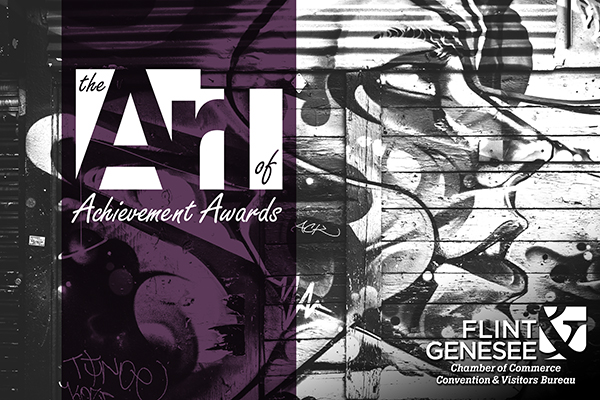 (FLINT, Mich. – Nov. 12, 2015) This evening, the Flint & Genesee Chamber of Commerce celebrated local businesses and customer-service providers who have gone above and beyond to positively impact the region in 2015.

About 350 people gathered at the Riverfront Banquet Center in downtown Flint to hear Robert Rummel, Senior Vice President of Chase and Chairman of the Chamber’s Board of Directors present 13 Art of Achievement Awards to outstanding businesses, community supporters and hospitality industry professionals.

“The Art of Achievement Awards provide the perfect opportunity to publicly recognize some of the great companies that are investing in Flint and Genesee County, and contributing to our economic growth,” said Rummel.

Kevin Babcock, who runs the FireStix Softball Tournament, was honored as the 2015 Community Champion. Babcock was recognized for his commitment to showcase Flint & Genesee with the annual the Mid-Michigan FireStix College Exposure Softball Tournament and the Michigan Blue Chip Softball Camp. The annual tournament attracts close to 1,500 high school softball players and their families to Genesee County.

Babcock works closely with the Flint & Genesee Convention and Visitors Bureau to provide hotel, restaurant and attraction information for participating teams and their supporters. Over the past 5 years, his work has had economic impact of nearly a $1 million for Flint & Genesee.

“Tonight’s award recipients are companies and individuals who are business savvy, customer-focused and civic-minded,” said Tim Herman, Chamber CEO. “One of the things they all have in common is their commitment to doing business right here in Genesee County.

“So on behalf of the entire business and hospitality communities, I want to thank them.”

The 2015 Art of Achievement Awards also honored the following businesses and individuals: